I never did get to check on the bees on Friday. The winds came up as they often do in the Highlands and the temps did not get above 55. No need to risk a nice tight cluster for my own curiosity. I will look in the next week for nice day to say hi to the girls.

My supplier for organic seeds is High Mowing Organic Seeds in Wolcott, Vermont. They only offer organic seeds and they have great selection. They are at www.highmowingseeds.com.

My supplier for fruit trees is Adams County Nursery in Aspers, Pennsylvania. We have decided to focus on disease resistance cultivars and the folks at Adams County have set me up with some new varieties that we are very excited about. This years catalog is fabulous for the home grower and orchardists alike. You can find them at
www.acnursery.com.

A Calf Is Born In the Country

This is the time of the year when calves are born here in the Blue Grass Valley.  These calves will grow and mature for 16-18 months before heading to market.  For now, they lay in the pasture next to their momma and feast on rolled out hay.  Often times they have a twin.

Seeds Are In the Mail

I just completed my seed order last week from High Mowing Organic Seeds.  I am excited for some new tomatoes and peppers varieties I will try this year.  Waiting on the mail lady and once she brings them, let the seed starting begin.

My five hives of bees have been on their own throughout the winter.  My mentor does not want me to open the hives to check on them until I get 55-60 degrees.  Tomorrow we expect 58 degrees and I’m going in.

The snow has melted and the top 4 inches of soil has thawed in the apple rows.  I have started to take up the trellis posts and supports.  The road up is getting pretty muddy so I will have hold off on delivering the posts for a little bit.  I am hoping to till the rows tomorrow afternoon just to smooth them out and get them ready for the final ditching for tree planting.

With the nice thaw we are having this week the trenches along the berries are draining out the water down the mountain.  I am waiting to get a good stretch of warm weather to lay sulfur on the blueberries and some organic fertilizer on the blackberries, raspberries and blueberries.

I have spent the last three weeks tapping maple trees for my neighbor Ivan.  We are trying out a new valve this year that fits between the tree and collection spout.  It is a one way valve and it is suppose to increase the maple water flow.  The taps are attached to plastic tubing that run down hill into a collection tank.

I have been working on and off through the month to get the high tunnel ready for planting.  I needed to make some adjustments on the roll up sides and I still don’t have it quite right yet.  They still lift a little too much when the wind blows and the straps can’t hold the sides in place which leads to a blow out of the plastic on the opposite of the tunnel.  Here are the sides I am talking about: 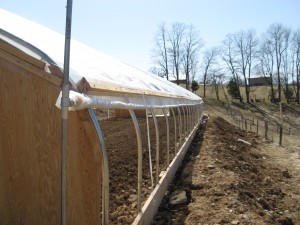 In this picture you see the side rolled all the way up.  When it is unrolled it should snug up tight to the bottom board you see along the ground.  I think I need to lower my straps a bit on that bottom board in order to hold the rolled down side firmly in place.

I also have been doing a lot of de-compacting the soil.  The bulldozer packed it down pretty tight when the pad was built so I have been using a soil ripper and tiller to loosen it up.  With all that I have harvested quite a few rock, well, actually parts of rock.  The tiller breaks up the limestone fairly easily and I am left with the six little rocks instead of one big one.  The seed bed is almost ready to go, I will start planting this week in the tunnel.  I have decided to go with mostly summer crops in the high tunnel.  It has been warm enough the past week to get the soil temps up and with the expected weather to be fair for awhile I think I can get a good start on them.

And here is how the it looks after some rock harvesting: 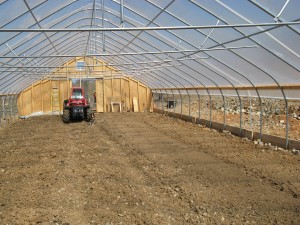 The weather forecast for Tuesday was below freezing temperatures and a chance for snow.  That has been the  mantra for the last couple of weeks.    What was different was the forecast for a calm wind.  Now that was news and I prepared to try again to cover the high tunnel with 6 mil plastic.

We had left the plastic lying on the ground along the tunnel.  The sudden influx of wind cut our last effort short a week ago.  Since then the Blue Grass Valley had endured another blizzard and eight inches of snow.    The snow helped to keeep the plastic from blowing away.  So first order of business was to clear the 104 foot long plastic of the ice and snow from the last blizzard.  Then the decision was made to try and pull the plastic up on the framework.  Some ropes were tied to bunched plastic every 20 or feet along the length of the plastic.  Since the window for calm wind was short, I decided to attempt to pull the plastic up before my high school help arrived after school.  The three person job had just morphed into a more compact crew, namely me myself and I.

So here is how it looked as I started pulling the plastic up one rope at a time. 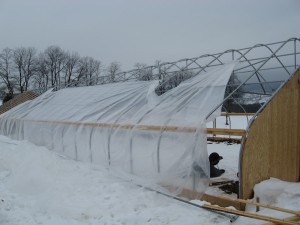 You can see I used ropes to pull the plastic up as high as I could before moving down the line to get some of the plastic up along the entire length of the tunnel.  I felt pretty good about things so I stopped to take a few pictures.

As I resumed the pulling, a small breath of wind came and soon the plastic started to slip back down the side of the tunnel.  I had decided not to tie the plastic off on each rope because the wind was calm.  You would think I would be a tad more cautious.  My sense of calm vanished with the soft and gentle puff of the mountain zephyr.   (I can wax poetic now, but at the time I was bit more earthy in my assessment of the situation).  I vowed not to take any more pictures until I got the plastic secured down.  After a few minutes I was able to regain my advantage and had the plastic up and over with some more pulling and sliding down the bows with ropes in hand.

Following the advice of my high tunnel supplier, Ed Person of Ledgewood Farms, I doubled my end board screws as well as attaching my roll up side rails prior to securing the plastic to the hip boards.  Finally I used straps to go up and over the tunnel to take out some of the slack as well as securing the side walls and roll up sides.  The snow started to fall as I was finishing up and with the snow came the wind again.  Hello old friend.  I’m ready for you now. 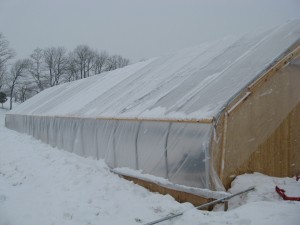 I picked up the camera again once I was confidant the tunnel plastic was staying put.  The tunnel design sheds the snow fairly well and as I finished up I was greeted with the sound of snow  slooshing down the plastic and a thump as it hit the ground.  Inside the house was pretty neat too. 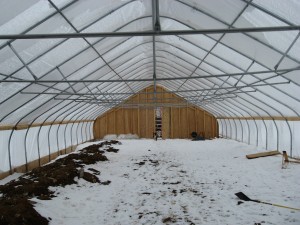 The sounds inside were the flicks of snow hitting the roof and some soft flapping of plastic against the metal bows.  Now all we need is the sun to come out and melt the snow inside, dry it up enough for me to bring the tractor in and start the process of preparing the beds for their seed.

Its a new day.